Phasing:
Incorporated in the development of proposal of Ratnagiri Campus is the strategy for phasing construction, which hence proposes three distinct phases. The construction is planned to move away from administration as early as possible to minimize disturbance and covered corridors to have direct access to individual clusters in turn giving protection from heavy rainfall. The building progress of the centre would move in relatively complete increments since the courts associated with each phase would be substantially finished in sequence.

During the Phase I, Administrative Block was constructed which is currently housing all the academic and administrative activities of Ratnagiri Sub-Centre. The Phase II is likely to be commenced from October 2007 which would comprise of: 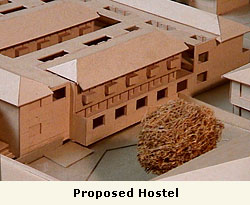 Phase II
The Phase II would begin with

One of the Warden's Quarters shall function as guest house till the completion of final phase.

Phase III (a)
The third Phase shall consist of

This phase shall also include development of outdoor areas like knowledge kund parking and drop off areas thus giving a finished touch to the academic and hostel clusters.